I’m currently open for work and would love to hear from you! Feel free to send me an email: ddang.designs@gmail.com

I’m an avid podcast listener and I love that I’m able to gain insights and learn about how stuff works! However after a while I found myself using jumping apps because I would lose track of my last listens in the Apple Podcast so I decided to take on the challenge of redesigning the app!

Having a process in this redesign exercise was important because it allowed me to organise my thoughts and it formed the foundation of my redesign solution. I took the following steps: 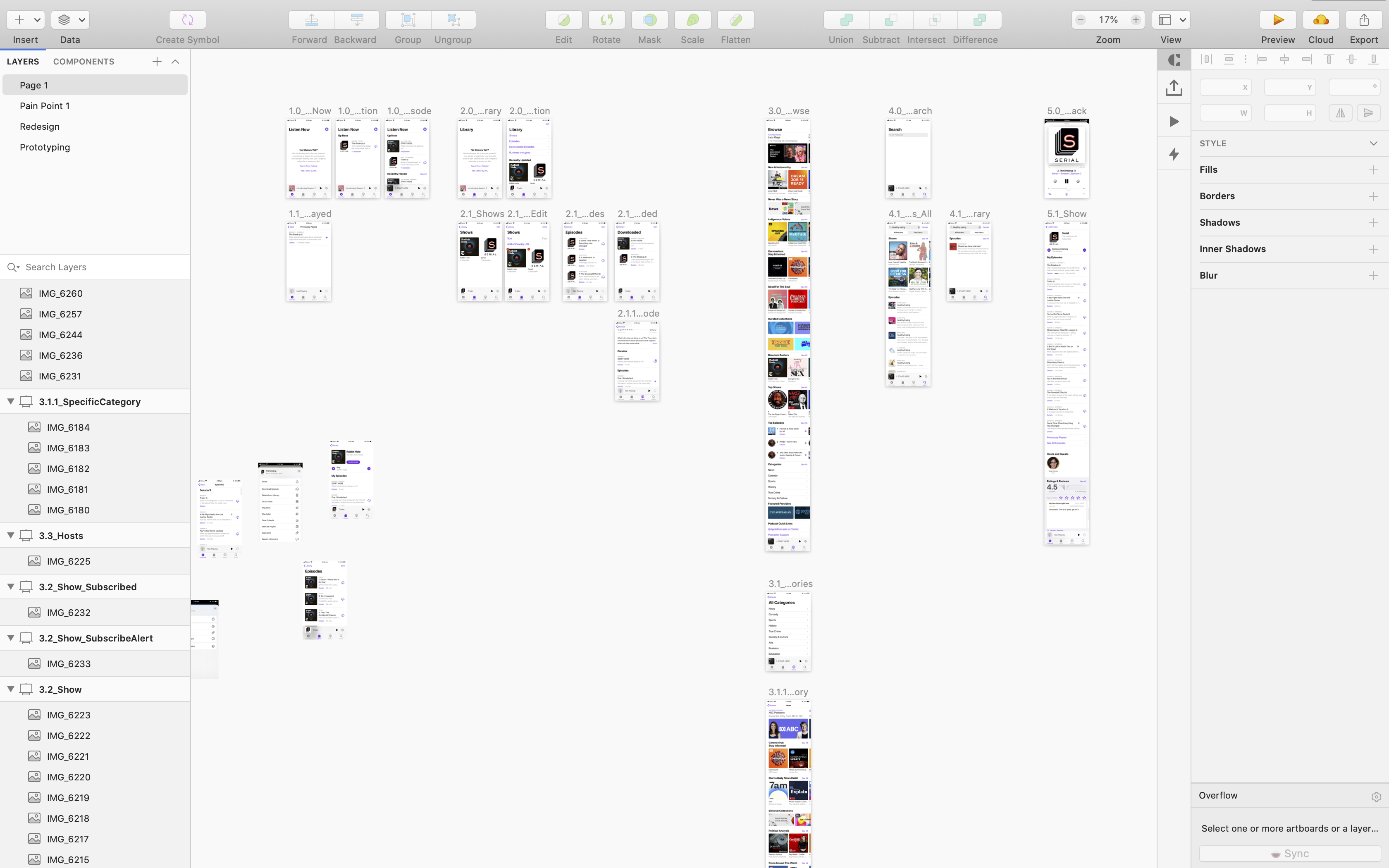 Insights to the Problem

“The apple podcast app was great about 4+ years ago. It was so clear and easy to track the podcasts you have listened to. It was easy to update podcasts, and organize them easily. And now, the Apple podcast app always shows something different, in different orders. And I've just given up on the app.”

I conducted an app audit on Apple Podcast as well its popular competitors Overcast, Castro and Pocket Casts. I also did a deep dive in online forums such as Reddit and interviewed five of my podcast-listening friends to get an understanding of their listening habits and why users were frustrated with the native Apple podcast app.

Which Problem to Tackle?

The majority of users’ frustration were because they found the app’s navigation just simply confusing and resolved this issue by switching to another podcast app where it was much easier for them to find what they needed. Knowing that having limited features was not the main issue, I decided to focus on creating an understandable navigation system.

As I was conduction an app audit, I too felt frustrated figuring out the flows behind certain actions. I reversed engineered my thought process and first considered what Apple’s intentions were behind the design and worked from there, rather than noticing a problem, scraping the existing design and starting anew.

This creates confusion when users see three things playing at once. 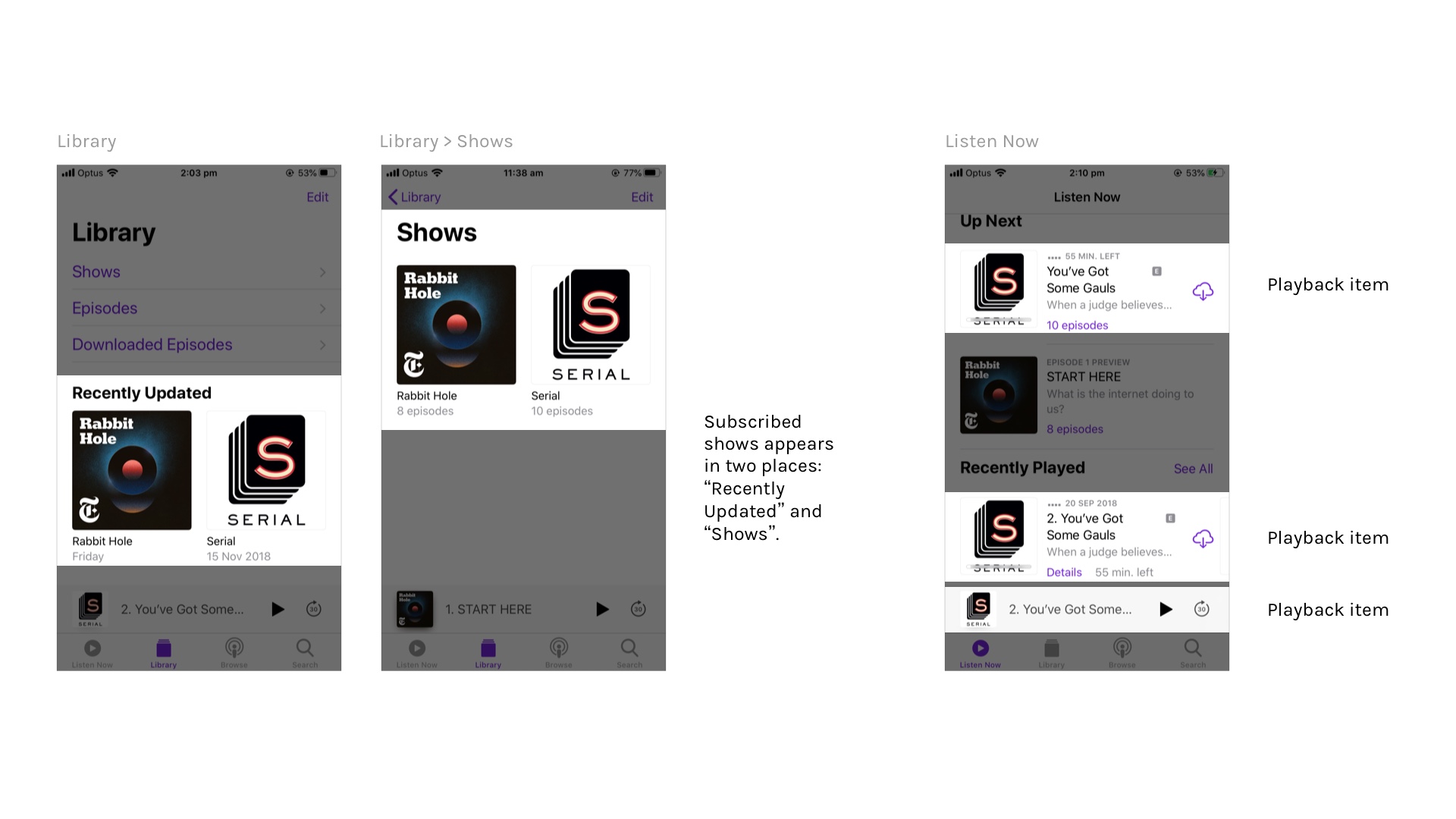 “Shows” and “Recently Updated” should be a place where users go for their subscribed content however unsubscribed shows appear in both places if users add an episode from an unsubscribed show to the playing queue “Up Next”. 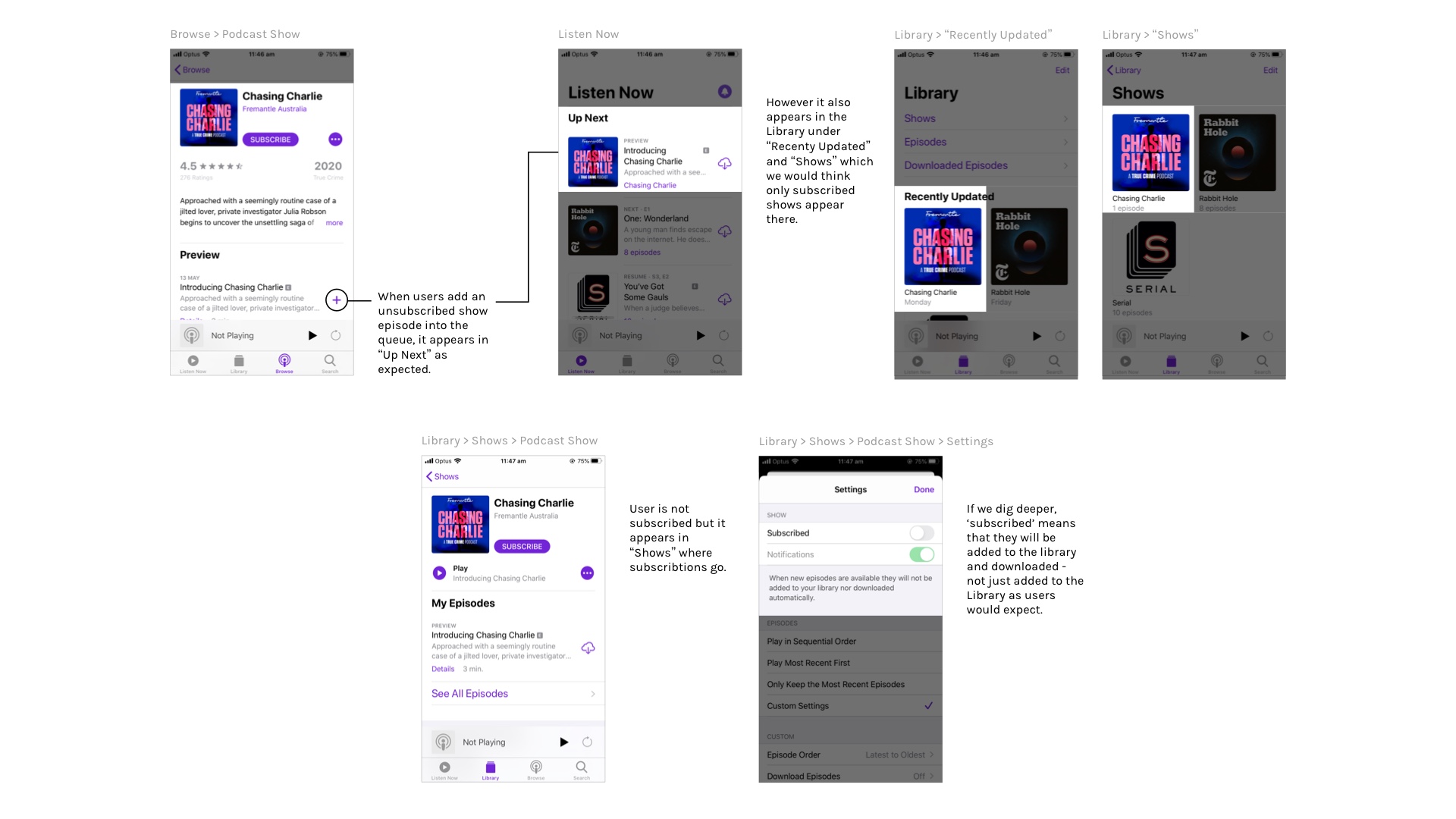 "Episodes" list the latest episodes from subscribed podcasts however the ambiguous title leaves users confused with what to do because it lists the unlistened, subscribed, unsubscribed, queued episodes from all "Shows". It almost acts like a 'to do' list for catching up on podcasts but it doesn’t allow for a natural listening experience as it lists all shows from when they were released. 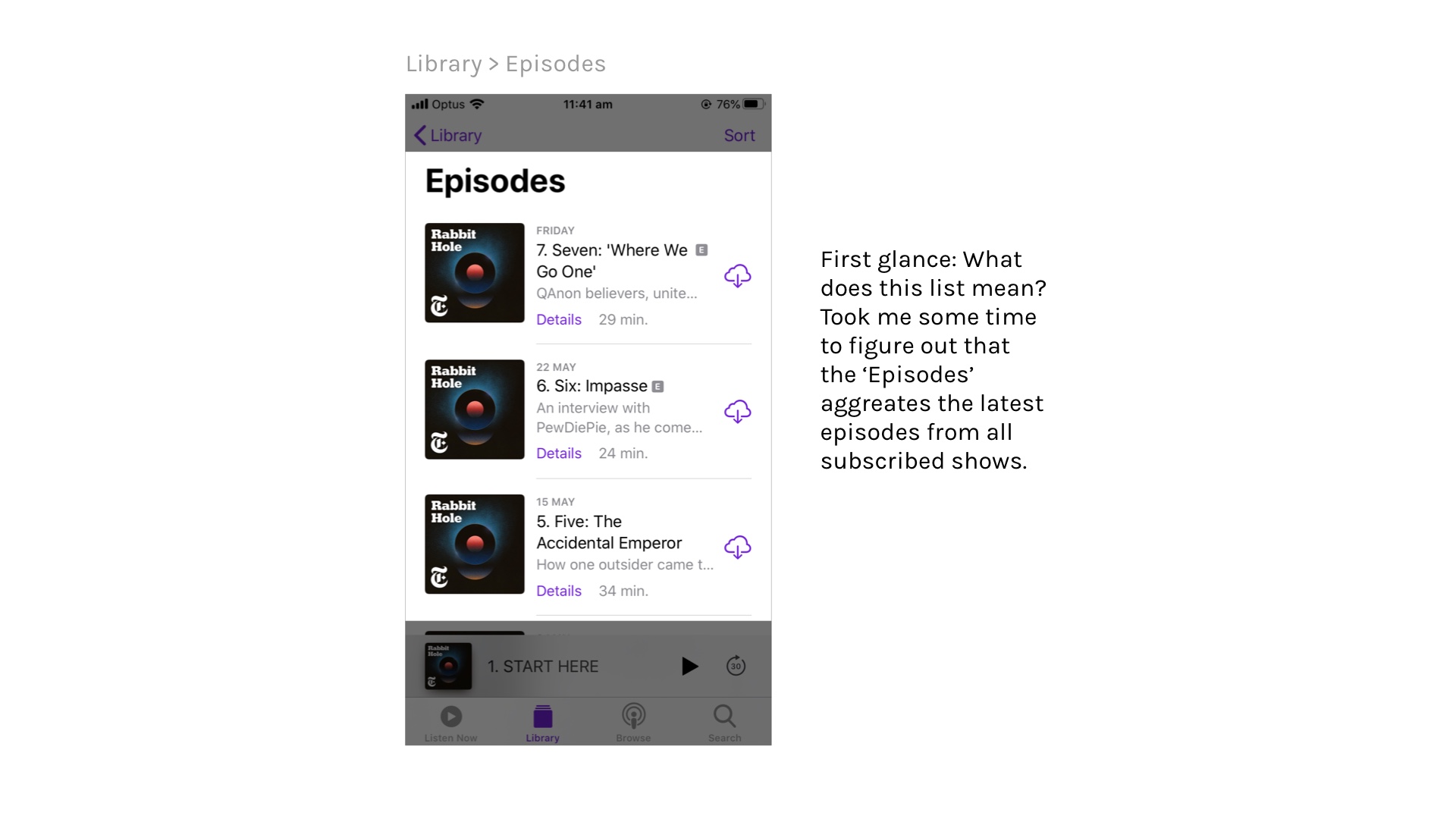 “Recently Played” is the ‘history’ of all listened podcasts. However it excludes some episodes that users have listened. For example, episodes that have been queued or part of "Shows" will appear here, however if a user listens to an episode that they have browsed that is not from a show in their Library, then it won’t appear on “Recently Played”. 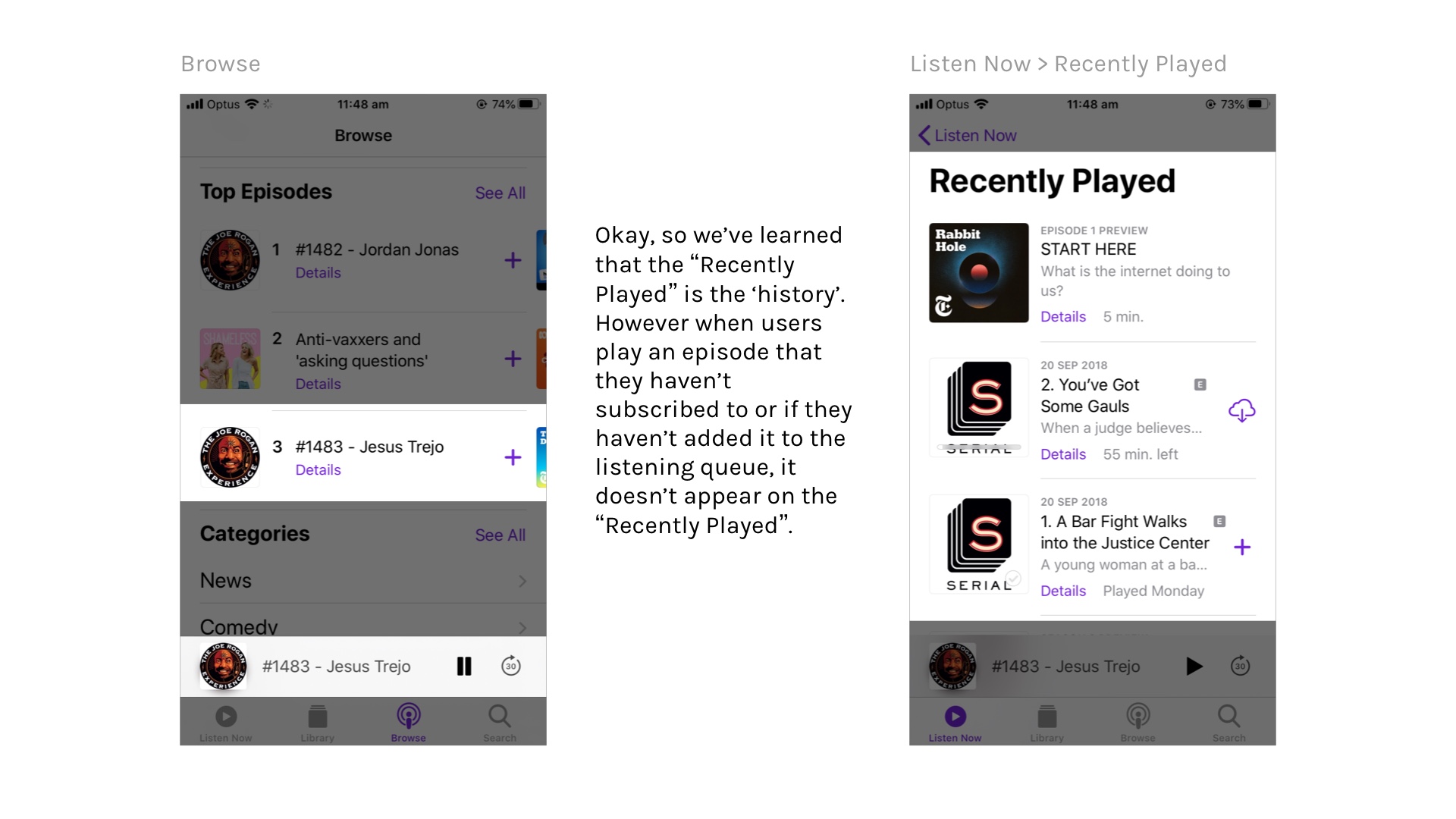 After listening to an episode, the episode removes itself from "My Episodes", leaving users confused about what has happened to the episode. Though it removes the clutter of listened episodes, users don’t know where to go to find them. 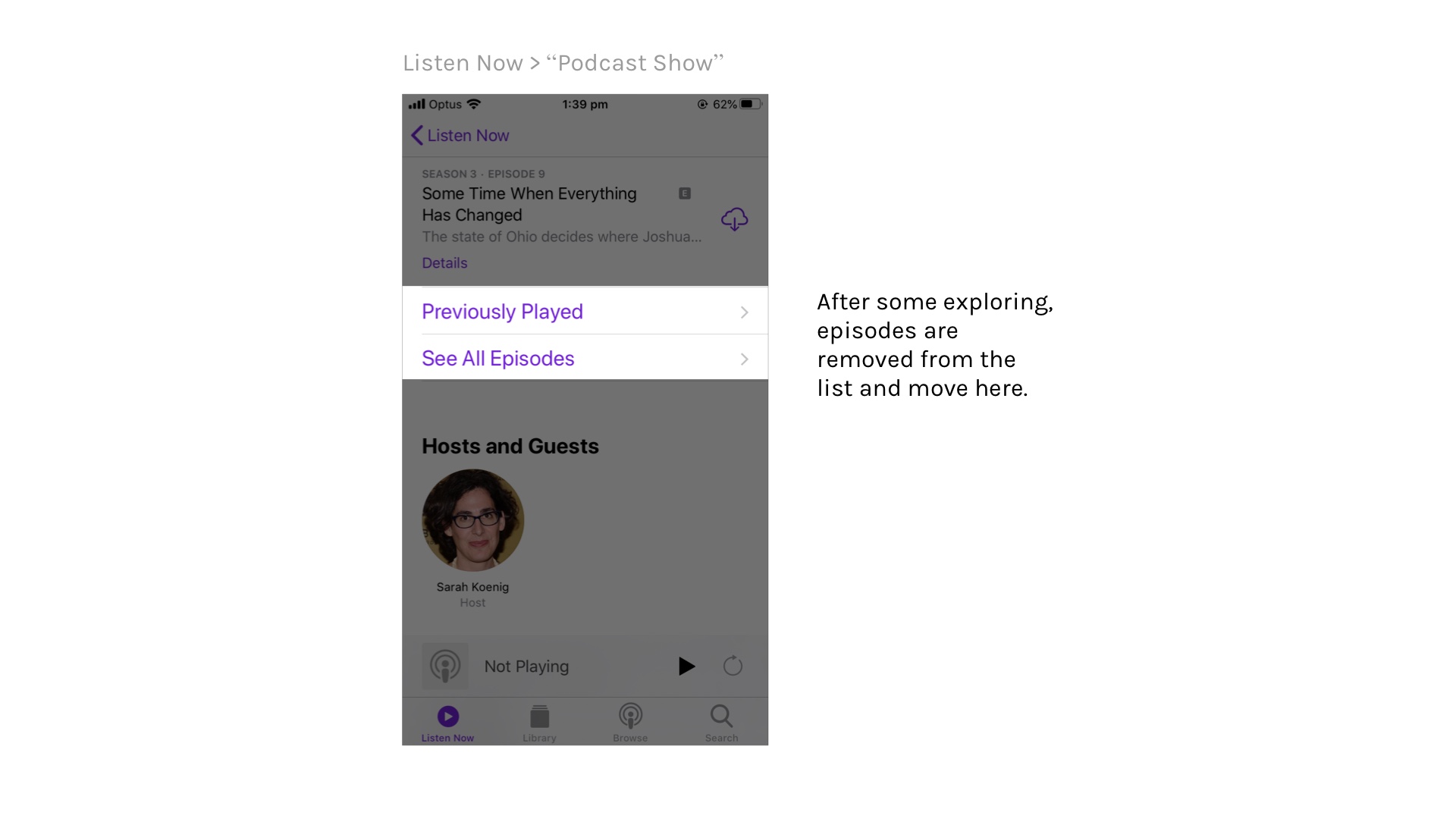 I took pen to paper and explored different solutions taking inspiration from other podcast competitors as well as streaming and listening apps such as Youtube, Netflix and Spotify. 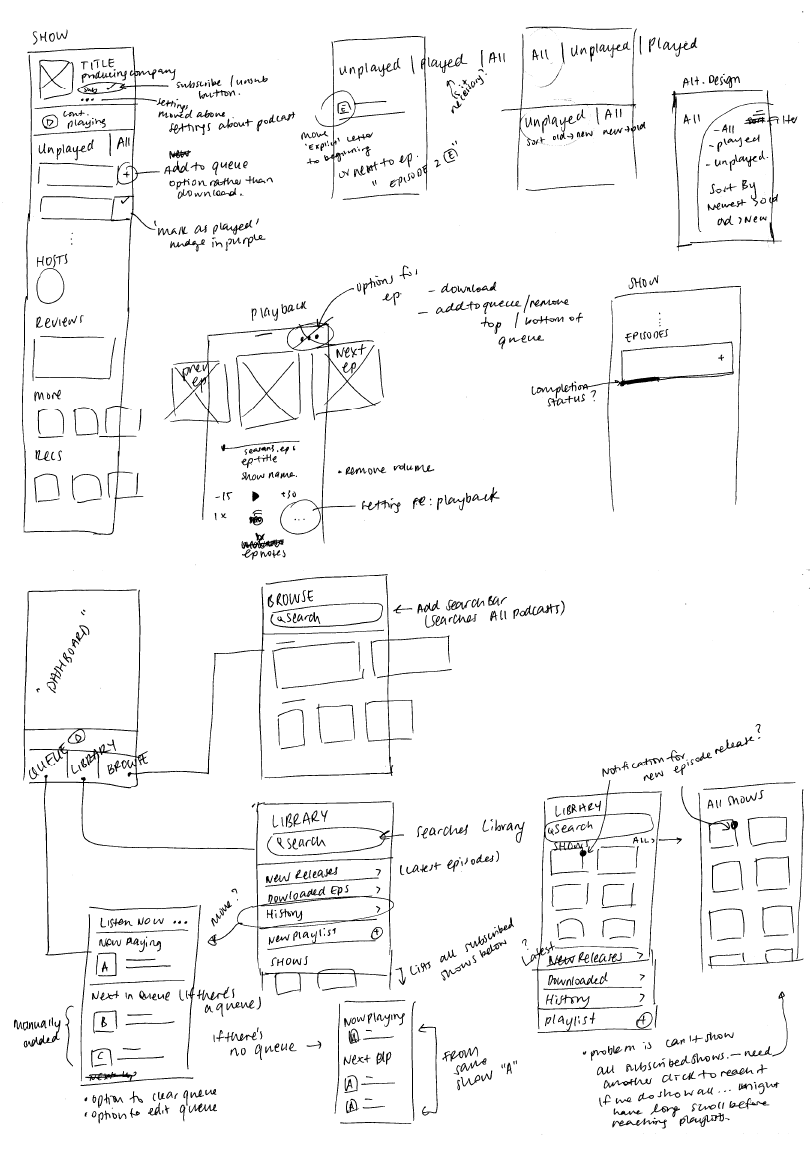 The current Apple Podcast app has four items in the navigation footer. I decided to reduce the clutter, cut down to three menu items and move the search functionality to the Library and Browse pages. 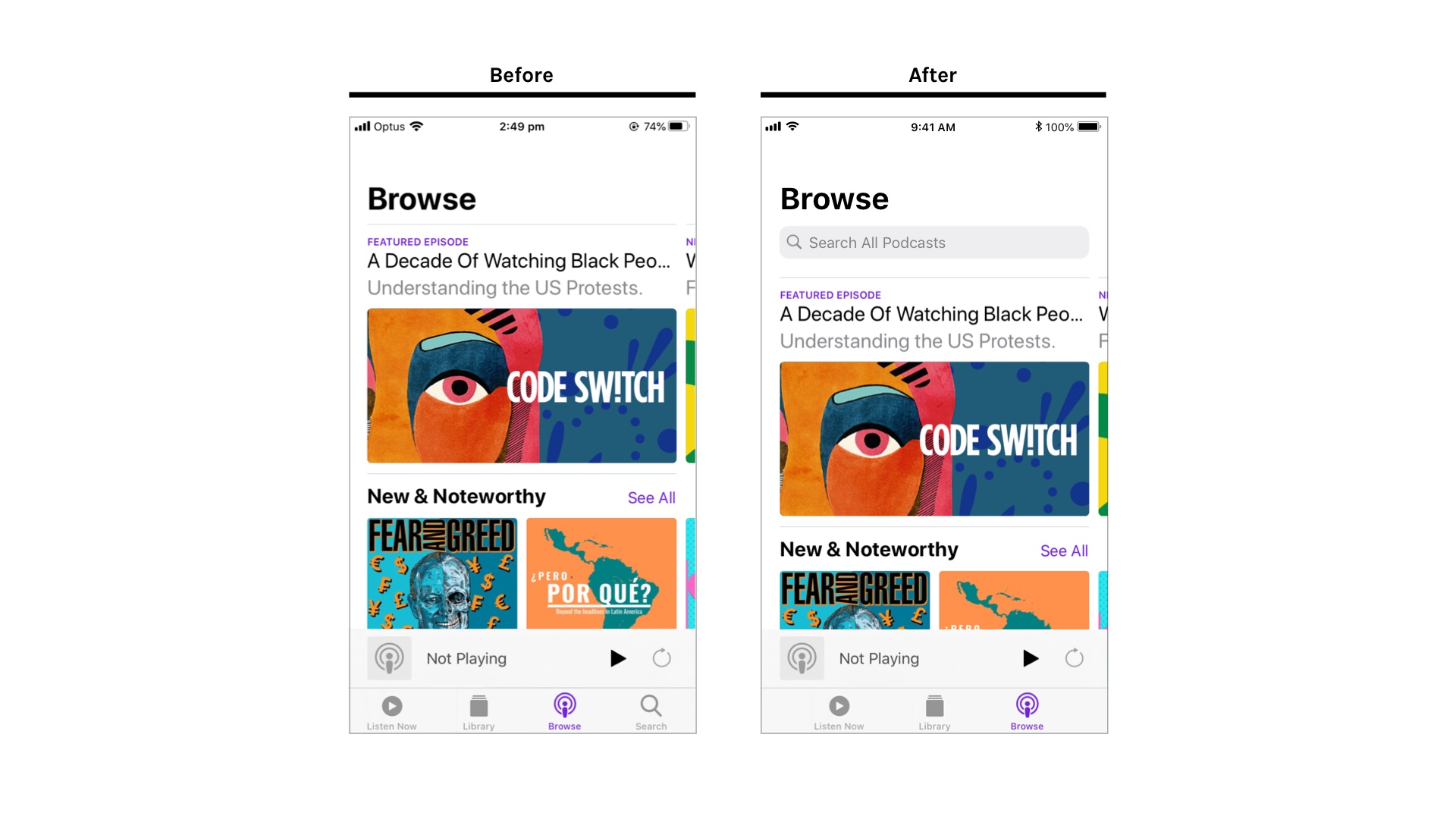 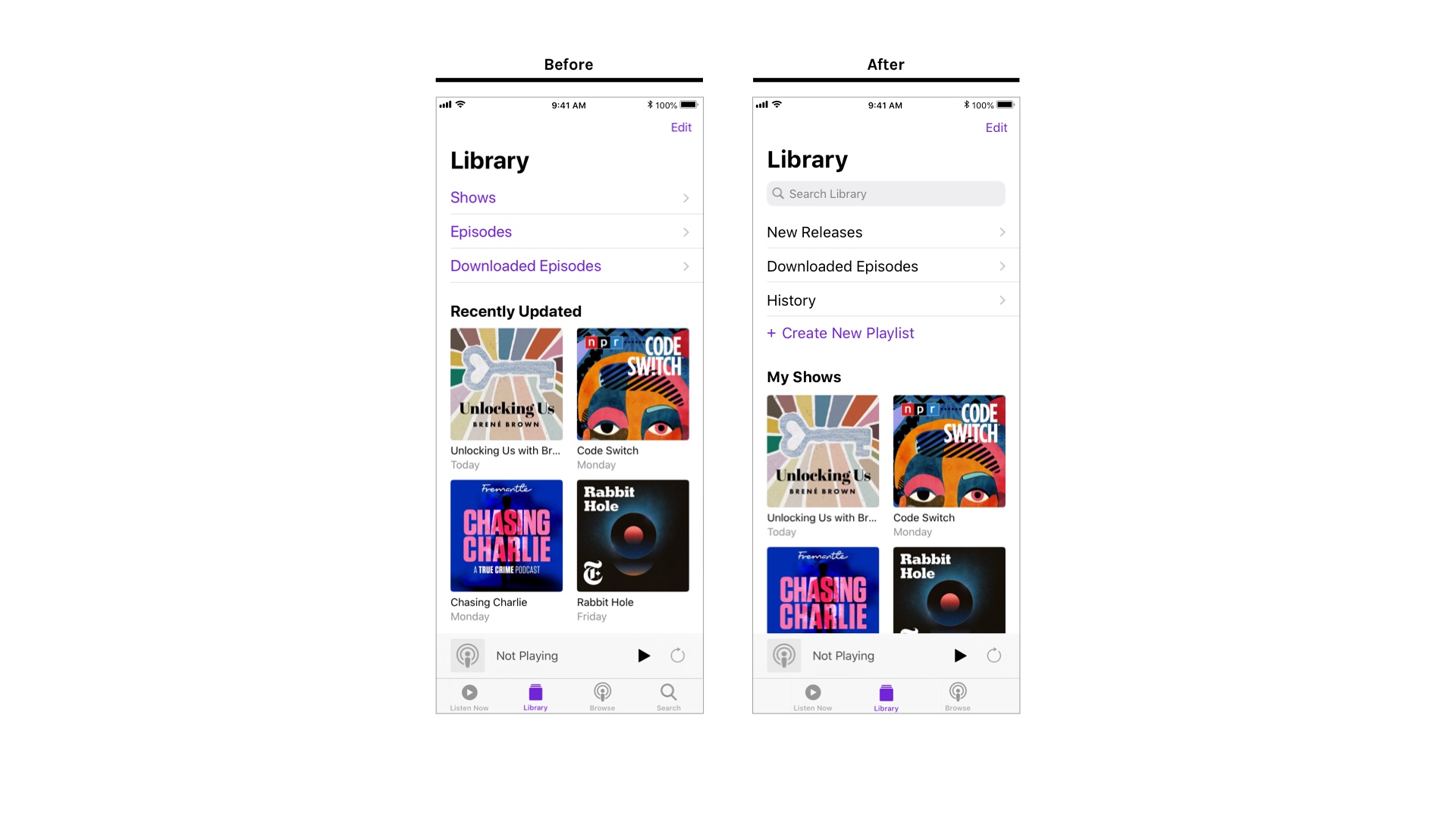 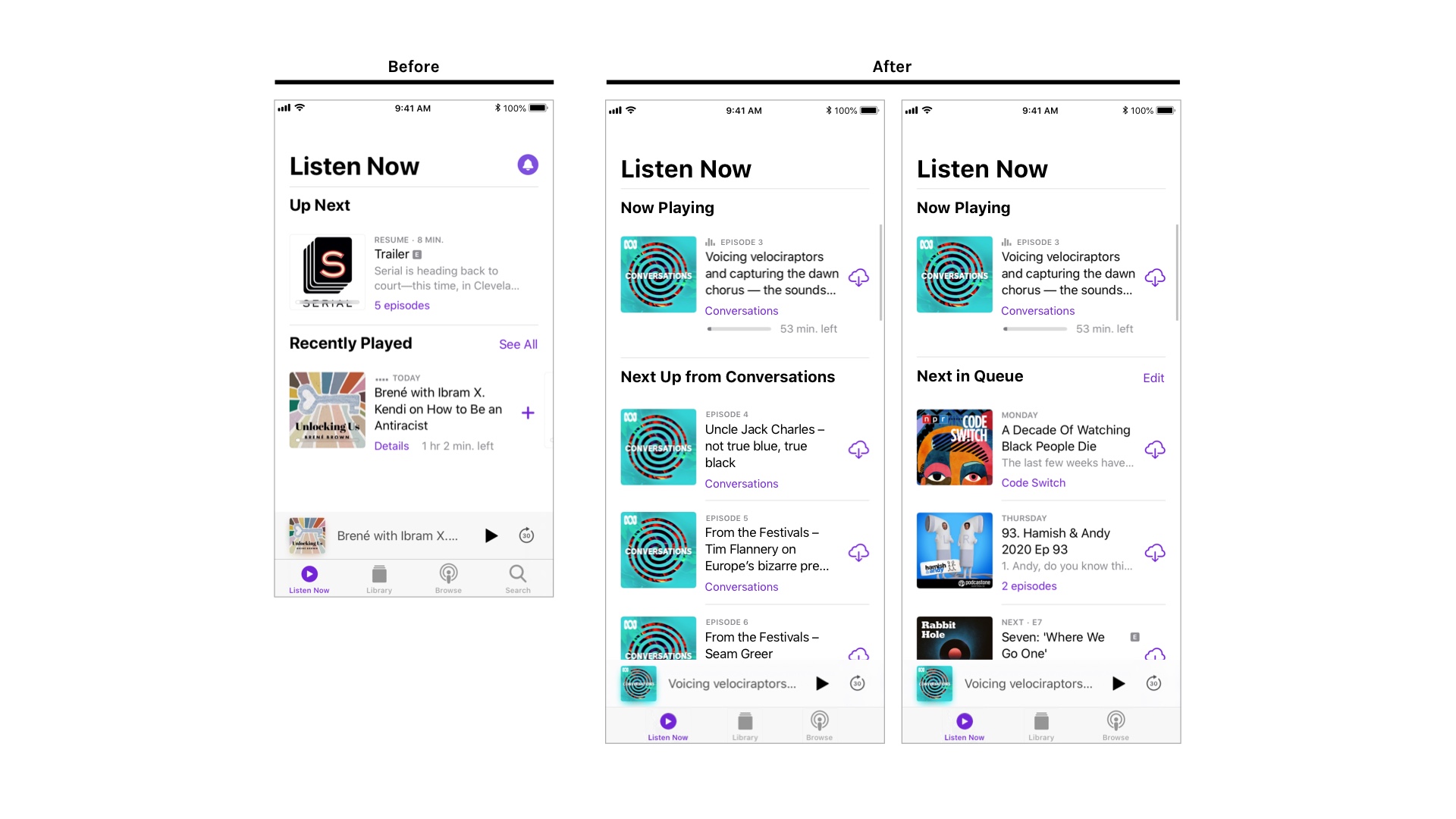 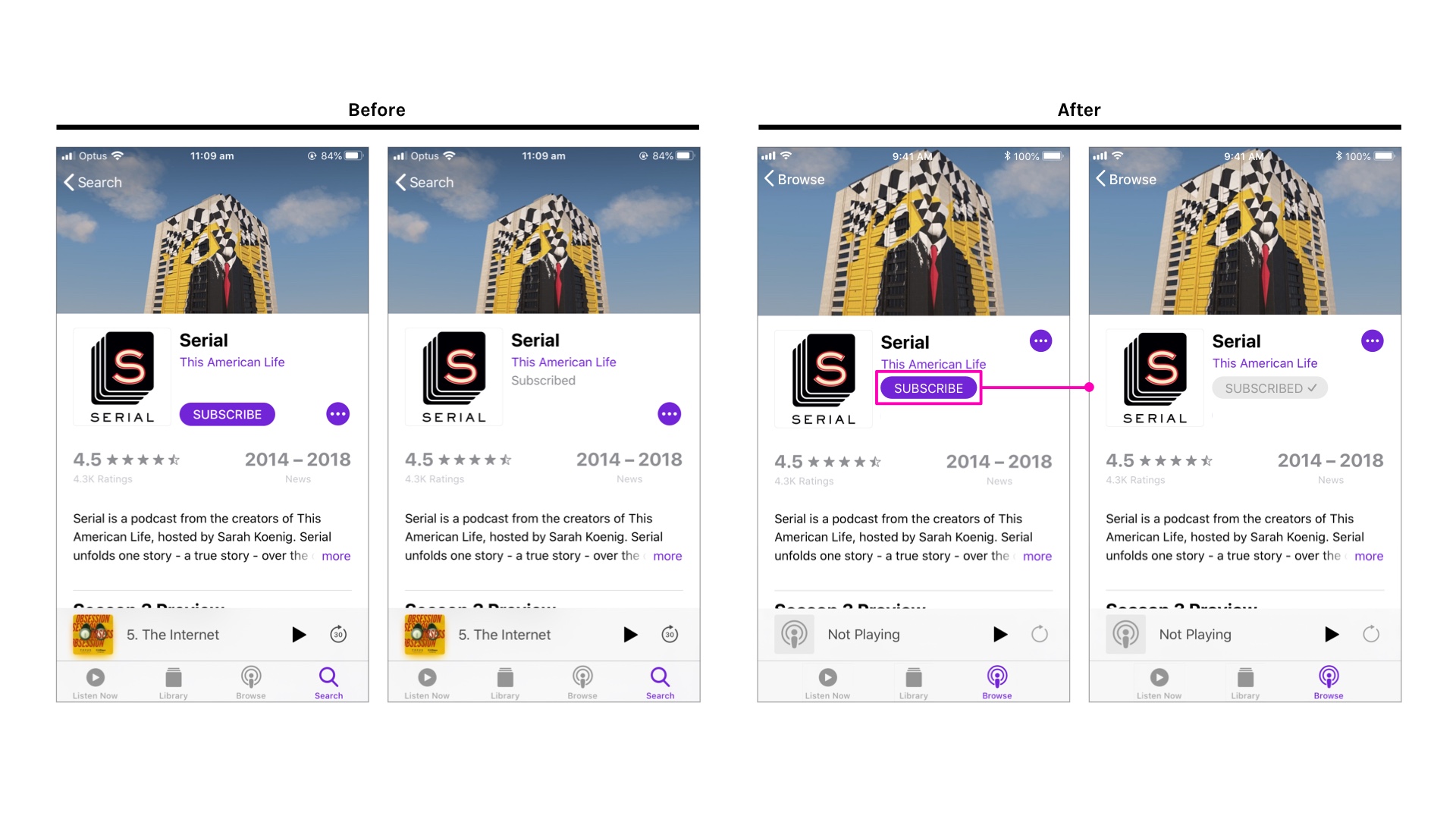 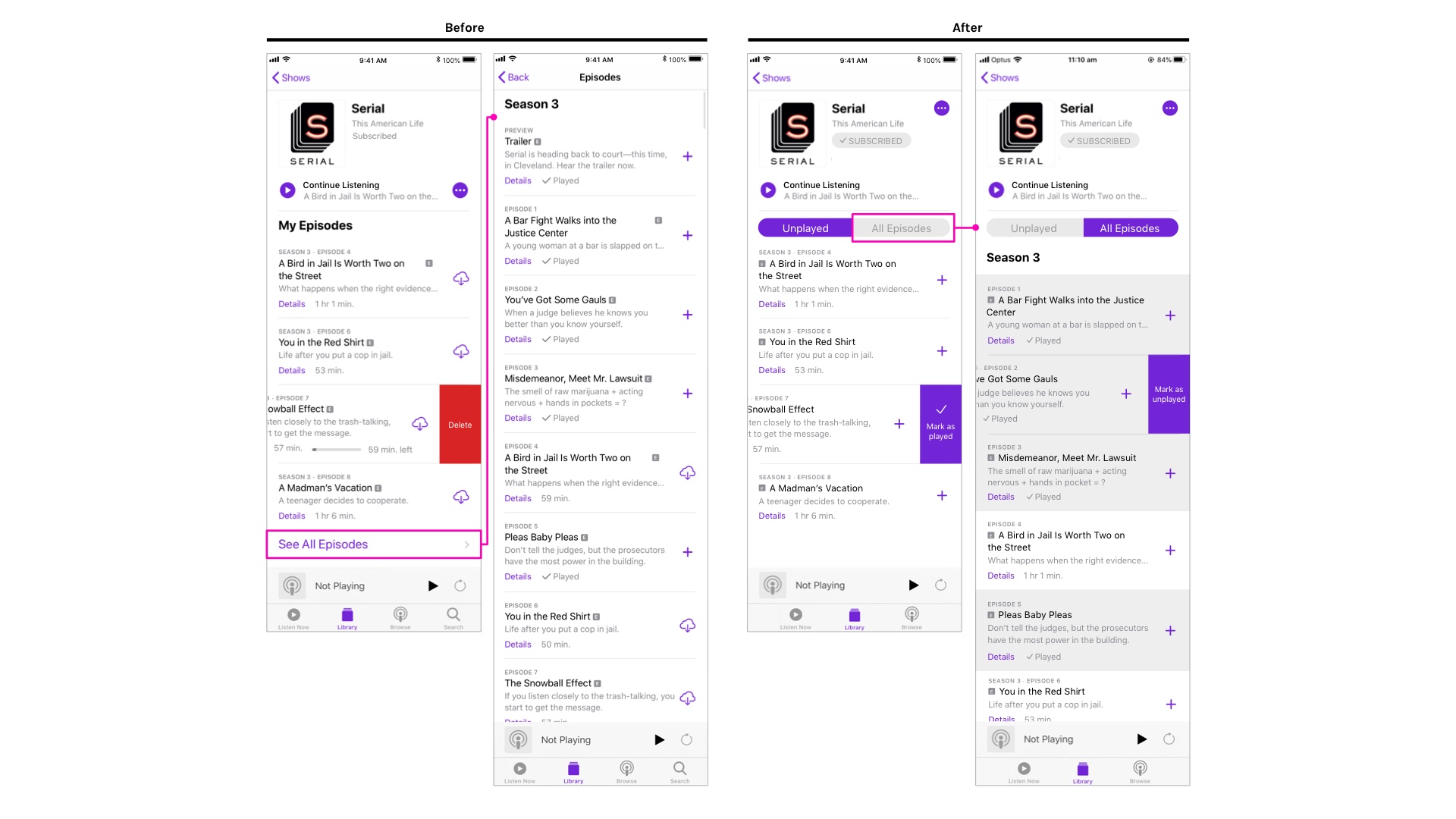 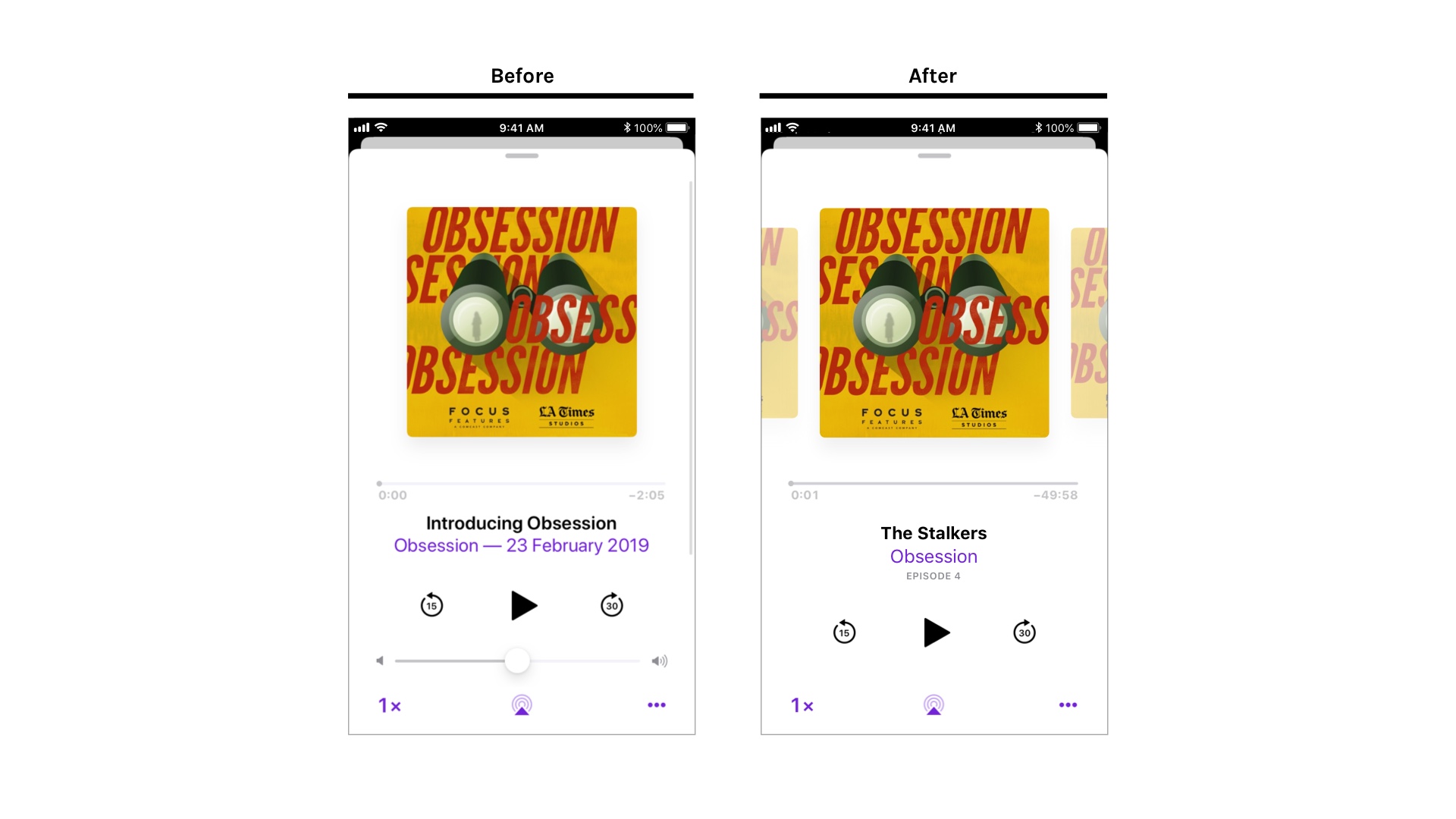 I've also learned that UX writing is very important in order to convey clear messages. It's important to not leave users in the dark as it will deter them from continuing to use the product.